Who knew such a thing as a Flexitarian existed and yet I am one.

For years I have contended with my sarcastic friends not appreciating my style of vegetarianism or how required an explanation was when I (for ease) label myself a veggie to those I rarely need to eat with and then they see me instagram-ing my latest Bacon Frazzle Chicken Tikka salad. I can now tell them, I'm not a shit vegetarian or a picky eater - I'm a Flexitarian.

I've not really helped myself and my family have never really respected my vegetarianism even when it was strict. My dad decided I was only doing it because Hannah in Neighbours did (circa 1989), that wasn't the sole reason, it may have encouraged me, admittedly. This tied in perfectly with a trip to Morocco when I was 7 and saw prawns with eyes and legs, I've never touched them since.

I dabbled with quitting when I was 12 but I could only vaguely stomach school dinners 'meat', it had to be covered in something else and have no fleshy counterparts. This didn't last long. Then at 16 I managed to squeeze chicken in to my diet, so long as it was breast, no skin and no veiny bits. At 21, I introduced bacon (fat cut off and oven cooked to a crisp), this may be linked to required hangover cures. At 28, my pregnancy with my second born required the introduction of thinly sliced ham either on a pizza or hidden in a toastie (adopting Caroline Aherne's Royal Family character "baby wants it"). From here on in, my flakiness is confirmed.*

- "But you eat fish right?" Nope.
- If you use thigh meat I will know (you know who you are).
- "So basically you're just fussy". No, I don't like the thought of meat, the fleshiness and there are just certain items I can get my head around to have more variety.
- I will be a complete veggie in a variety of countries, especially if it's brother is still running free around the restaurant/kiosk/roadside.
- "So you feed your boyfriend mung bean stew all the time, poor man..." I'm happy to cook meat, the kids enjoy the responsibility of being the tasters.

So basically, a flexitarian is someone who rarely eats meat, maybe just one day a week and/or when they do they aim for more ethically sourced produce dependant on whether their reasons are based around supposed animal cruelty. Or those that appreciate the health benefits of plant based foods or cutting out the fat content of many meats. Yes, I appreciate that there are certain benefits of meat and fish, but these proteins and vitamins CAN be found elsewhere and all the same it is a choice. Many companies, such as 'Quorn' advertise as the healthy option and not the vegetarian option. It is an ever increasing 'thing'.

I do agree that this is another addition to the ever increasing Urban Dictionary, but we live in times where labels have to evolve and more importantly, it suits me.

For a pretty book on Flexitarianism, try this.
The Part-Time Vegetarian: Flexible Recipes to Go (Nearly) Meat-Free Hardcover – 17 Sep 2015
by Nicola Graimes (Author) 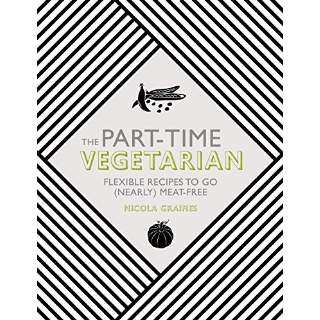 * I will cook with chorizo for the flavour but not eat the stuff.

Try these for a few nifty recipes.